The Median XL sorceress class employs devastating spells and powerful wards to protect her should she choose to fight in melee combat. 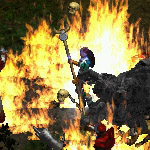 BACKGROUND OF THE MEDIAN XL SORCERESS

The Zann Esu covens have always been regarded with suspicion by the other mage clans of Sanctuary. Although their mastery of elemental magic was undeniable, the witch covens keep away from society and adhere to strict ethical rules and their own religion of nature worship.

Their secluded lifestyle and mysterious powers gave rise to rumours among the common folk about hexcraft and a pact with the devil. Members of the covens were hunted down as witches and prosecuted by the Church until the witches finally fled deep into the forests to the underground city of Zann Rok, never to be seen again.

Now more myth than history, folk tales of the Zann Esu tell of haunting chants and dances to the full moon deep in the forest and unearthly spirits hunting down and slaying any witnesses to the spectacle...

Moves 10% faster than other classes.

Sorceresses are adept at the use of magical staves and orbs as channelling foci for their spells. The smaller orbs are one-handed, enabling the spellcaster to carry a shield. However, staves are more efficient and allow the sorceress to cast her spells much faster.

See THIS PAGE for more information about Area Effect Attack.

Because traditional warrior plate is cumbersome and impedes mobility and spell casting, the ancient mage clans created their own exotic designs that allow for easy movement and precise gestures. Though the knowledge to create this armour has been lost to the ages, you may come across one of the few surviving Eastern kazarghands, Khanduran lamellar plates or the splendid Kehjistani ceremonial armours...

If a sorceress wishes to become a master of her arts, she must devote her studies and training to no more than two elemental powers.

The Zann Esu believe that magi who dabble in many arts at once lack the patience and discipline required to properly serve the elemental aspects of the Deity. Zann Esu neolytes are consecrated to two elements of nature at their rite of passage and are forbidden to study the other elements. Those who violate this sacred rule are excommunicated.

You can only learn two elements out of four (fire, cold, lightning, poison).