The Median XL paladin class is an armour-clad heavyweight who can take a beating and return the favours with physical and elemental melee attacks and spells. 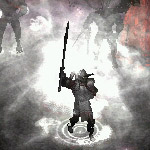 BACKGROUND OF THE MEDIAN XL PALADIN

After the fall of the Hand of Zakarum, the paladin orders disbanded one by one or were torn apart by internal conflicts. The weakening influence of the central Church in Kehjistan and the mysterious disappearance of the Que-Hegan only contributed to the chaos.

The faithful of the Light looked elsewhere for answers and banded together around the new prophets. From the ashes of the old orders, two sects with a radically different interpretation of the Akaran scriptures and diametrically opposite morals arose. Although many feared for a holy war, the leaders of the sects agreed to close their ranks and work together against the common foe unfettered by infighting and distrust.

The Covenant of the Golden Flame, led by a prophet who claims to receive instructions directly from the angel Auriel, preaches unity and brotherhood among the faithful of Zakarum and the destruction of those who work against the Church. By joining forces against the demonic legions, the armies of Man and Angel would be able to deliver the death blow to the Burning Hells.

The sinister Black Sun Cult, under the command of an avatar of the angel Imperius, sees mankind as inherently unstable and prone to fall to demonic temptation. For the High Heavens to win the Eternal War, its acolytes argue, humanity must be cleansed from Sanctuary.

Scholars believe that the schism between the two orders heralds an all out civil war in the High Heavens about the fate of Sanctuary. But all agree that whatever the outcome, it is in humanity’s best interest to banish all influence of the Burning Hells from Sanctuary...

The holy warriors of the Covenant prefer heavy one-handed or two-handed crushing weapons to shatter the bones of their enemies. Only the Covenant’s champions can wield the order’s powerful maces and hammers, blessed in the holy waters of the Argentek for maximum impact.

Although a less common sight, some champions of the Church are seen wielding jousting lances. While lacking in speed, they enable the wielder to attack from a safe distance, avoiding most counterattacks.

The Black Sun Cult has less restrictive morals and is eager to do whatever it takes. Despite the corrupting influence of the arcane, the Cult’s warriors are trained in the use of magically charged channelling sceptres in melee and elemental combat.

See THIS PAGE for more information about Amazing Grace.

The Church is famous for its high quality shields, but many paladins eschew the use of a shield altogether. A true defender of the Light does not hide behind a shield, but challenges his enemies to strike first and then retaliates with decisive force.

The blackguards and shadowpriests of the Black Sun Cult on the other hand have no qualms about using a shield to protect themselves and their own interests and consider the two-handed combat style of the Covenant foolish and suicidal.

A distinctive feature of the paladin orders in battle are their full helms emblazoned with the order’s crest. The Covenant prefers the protection of the impenetrable steel hundsgugel helm, whereas the Cult goes for the intimidation factor of a large horned death’s head.

Although there is an uneasy peace between the two paladin orders, neither side has much love for the other and those who prefer to learn both doctrines would probably be treated as traitors and burned by the Covenant or flayed alive by the Cult.

You have to choose between Holy and Unholy skills.
You may choose either a Light or Shadow influence regardless of your devotion.
Some say there is even a third, more neutral path.