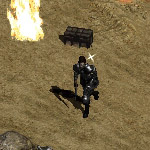 BACKGROUND OF THE MEDIAN XL ASSASSIN

The Order of the Mageslayers, or Viz-Jaq'Taar, was created in the aftermath of the Mage Clan Wars that ravaged Kehjistan. Intended to police the Mage Clans for the creeping dark influence of magic, the Mageslayers were to seek out those who fell for the whispers of demons and destroy them before they could cause further harm.

The Mage Council, knowing very well that such an organisation would be subverted and used as a weapon by the Mage Clans themselves to settle the endemic power struggle between the Clans, went to great lengths to prevent the Mageslayers from being useful to any of the Clans. To this end, the Order would eschew the magical arts and employ mechanical and enchanted devices and the innate powers of the mind.

For both practical and symbolic reasons, the Order's headquarters were founded in the ruins of Vizjun, once a thriving city under the Annuit Clan, now a blighted zone of death glowing with deadly mana radiation. Mageslayer initiates were taught to ritually disconnect themselves from the ethereal plane, rendering them unable to wield magic but protecting them from the pervasive radiation that cripples and kills trespassers and slowly erodes the enchanted structures of the mage city.

The Warrior Children of Vizjun, or Viz-Jaq'Taar, became a force to be reckoned with. Their unique needs necessitated the development of ever more advanced technology, and their kensais and techsmiths swarmed out over the world to combat evil on a local scale. The Order attracted the best scientists of Xiansai and other lands, and according to some even received the blessing and gifts of the very archangel of the Cosmic Spheres, Rosicruciel.

While most mages are aware of the technological prowess of the Mageslayers, few know how much is really hidden from the outside world at Sector D, the Viz-Jaq'Taari base in the Aranoch desert, camouflaged by a light-bending cloak field. It is whispered that the inner circle of Mageslayers is in possession of ever-burning lanterns powered by trapped lightning, gleaming flying chariots, disintegrating beams of light and metallic arrows with tails of fire that can strike any location in the known world.

But no one knows for sure because the canyon leading to the compound is considered cursed by the locals and protected by hidden traps, holographic illusions and cybernetic death rays.

Today the Order operates 209 secret bases, some manned, others entirely automated, some located in the basement of a friendly villager in the endless jungle, others sprawling underwater complexes in the Sea of Light guarded by trained hammerhead sharks with heat rays mounted on their heads.

All bases are centrally controlled by an artificial sentient system which according to the few spies that made it out alive was lifted by metal angels up beyond the High Heavens...

Assassins are trained in all disciplines of the martial arts and master their arts' weapons.

Martial artists who prefer either the protection of a shield or the intimidation factor of two blades train in the Viz-Jaq'Taar's exotic claw fist weapons. Their large metal surfaces conductive to manaflux currents make them ideal for those who seek the aid of the psychic arts as well.

Kensais who wield the fearsome naginata are known as blademasters. The naginata is one of the rarest weapons in the Kingdoms and most existing naginata are centuries old, passed on through generations by the Xiansai warrior-monks. Its combat style emphasis its long range, attacking with sweeping arcs of death that cleave through multiple enemies, enabling one blademaster to fend off an army.

See THIS PAGE for more information about Area Effect Attack.

With most attention of the Viz-Jaq'Taari techsmiths going to weapons, and their lightning-fast martial arts, few notable developments in the field of armourcrafting can be attributed to the Order. One important invention, however, are the crowd control shields employed by the Mageslayer urban strike forces, created from light but strong exotic alloys or specially treated demon bone with similar properties.