The Median XL amazon class is the fastest class in the game. Her ranged, melee and magical skills are powerful and focus on striking from a distance and moving at high speed. 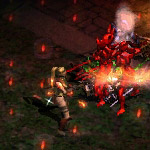 BACKGROUND OF THE MEDIAN XL AMAZON

The inhabitants of the Amazon Islands are mostly known to the outside world as traders, warriors and seafarers. Few realise that amazon society is much more complex than is often assumed.

The faith of the amazon people was considered to be a triune religion centred around the ancient deities Hefaetrus, Karcheus and Zerae, each representing one of the elements of nature. In addition to the three major deities, there are also a pantheon of guardian gods and goddesses keeping watch over the cities, villages and even ships, the most famous of which being Athulua who protects the capital of the same name.

But as scholarly research into amazon history continued, more and more signs and relics of a dark past surfaced. There was once a thriving cult devoted to a fourth deity, Kharos, who represented death and warfare. The cult engaged in blood sacrifice and reigned for hundreds of years before it was banished into the rainforests by the ancient nephalem Philios, Skovos and Lycander, the first high priestesses of Hefaetrus, Karcheus and Zerae. After failing to teach the native people the worship of the three deities, the priestesses created the three islands bearing their name where they raised a race of warriors from ice, fire and thunder and founded the modern amazon culture.

Loremasters continue to be amazed by the cultural diversity on such a small island as Skartara and the way the local conditions shape tribal culture and development, even though the impressions and memories of the survivors may be tainted by the fact that their captain was lowered into a volcano and their priest eaten alive by a blood tribe.

The mountain regions are home to nomadic dragon archer tribes and the remnants of the ancient triple deity cults. The rocky cliffs and loose ground at the peaks of Skartara can be a much more dangerous foe than any opposing tribe. Mobility and distance are of the utmost importance, and many archers prefer to fight in light armour. It is said that the few surviving members of the triple deity cults have developed techniques to shoot through barriers and summon their many dead to fight for them.

Ritualistic tribal warfare of the lower savannah regions emphasises a combat technique known as the phalanx, where two opposing battlelines march up to each other until contact is made, then attempt to push, shove and ram a path through the other side. Warriors trained for this type of combat usually wield spears and wear heavy armour to augment their primarily defensive combat doctrine.

The swampy delta of the Skaryass river is home to several sites of moon worship located around 'moon springs', gas geysers that burn with an eerie white flame. The mud and water effectively makes melee combat impossible and battles are usually fought at a distance with assegais and throwing spears.

Priestesses of Kharos are often seen wielding enchanted sceptres to symbolise their status and authority in the blood cult. Only one sceptre has been retrieved by a particularly daring treasure hunter; unlike the finely crafted weapons of the other tribes, the sceptre was found to be of unremarkable construction and easy to recreate by any skilled spellsmith.

Priestesses of Zerae prefer to be in the midst of battle and wield the fury of storm against their enemies. Since their power relies on lightning more than any specific weapon, they don't have a specific preference, although many have been reported seen using a sceptre.

Base cast rate increased when wielding a 1h weapon or a 2h melee one.

See THIS PAGE for more information about Mega Impact.

The primitive inhabitants of Skartara are not particularly advanced in armourcrafting, except for the moonfuries of Skaryass. Due to the swampy marshes around the river delta, dodging thrown weapons is impossible and in response the moonfuries developed some of the toughest and heaviest mortal shields ever forged, including the legendary setzschild.

Some surviving explorers also brought specimens of the tribes' exotic headgear, from heavy steel cervellieres to the wicked einherjar helms worn by the wild devotees of Kharos when they consume the blood nectar and ride through the night sky on flaming horses to hunt for sacrifices. At least, that was what one particularly crazy and half-burnt survivor seemed to remember just after he downed several bottles of alcohol and before he screamed Kharos' name a hundred times and jumped overboard.

Most scholars agree, though, that this is probably a daytime event.

Although there do exist roving mercenary bands that assimilate a variety of combat styles into their doctrine, most amazon warriors are faithful to their tribe.

You can only learn the level 18 skill of the bow, spear, javelin, blood or storm trees if you have no points in any of the other four skill trees, and vice versa.

On the savannahs of Skartara, speed is of the essence. The careful approach downwind of the herd, the wild dash at maximum speed, the decisive strike to kill the prey before it gets away or the herd turns the tables... a huntress lives her life five seconds at a time.

Spear amazons gain "Fury" when combining certain attacks, which increases attack and movement speed and empowers their other attacks.