The Median XL druid class is physically the weakest class in the game, but uses range and damage over time to his advantage or morphs into a fierce creature of nature. 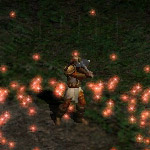 BACKGROUND OF THE MEDIAN XL DRUID

Founded by Fiacla-Géar, the brother of the ancient barbarian king Bul-Kathos, at the twilight of the nephalem era, the druid colleges were created to centralise and safeguard all knowledge of the powers of the earth and the wild.

As deep within Arreat the Worldstone, created by Inarius to subdue humanity's powers, begun to take effect, humanity slowly but surely lost its powers over the generations. Seeing the end of their era, Fiacla-Géar and Bul-Kathos, themselves among the last of the nephalem, sought to safeguard their knowledge and wisdom during the upcoming dark era.

It is believed that Bul-Kathos was misled by Inarius' angelic appearance and vowed to protect the Worldstone with his tribe's blood. Fiacla-Géar, who was more suspicious about the crystal, was summarily exiled from the barbarian lands by an enraged Bul-Kathos. Even today, the spirit of Bul-Kathos lives on in Mount Arreat, burying trespassers with earthquakes and rockslides, unaware that he is fanatically protecting the stone that doomed humanity.

During his long exile, Fiacla-Géar learned to speak with the spirits of nature - figments of the earth itself, imbued with limited sentience and intelligence by the touch of Inarius and Lilith at Sanctuary's creation. He realised that the curse that had befallen the nephalem did not extend to all of Sanctuary. The earth was an untapped source of magic waiting for humanity to find it.

Tur Dulra and the other druidic colleges teach that humanity should follow no one, neither angelic nor demonic, but should seek the power within themselves and nature. Although the teachings are based on the lore within the druidic holy book, the Scual Fada, allegedly written by Fiacla-Géar but mysteriously in many different scripts and unknown languages, few remember their true origin. Outsiders often look down upon druids as tree huggers, but perhaps they may turn out to be the only ones who are right...

Using the powers of nature, druids crafted many weapons out of untreated wood and stone to preserve the spirits within. To any outsider, the bows and staves are useless, being far too prone to breakage and not at all effective at channelling mana. When a druid wields such a weapon, however, their arrows mysteriously strike true over great distances and the very earth answers their call.

Although shapeshifting druids wield axes, maces, swords or daggers to symbolise the fists and spines of their wereform, the weapon is assimilated in the shapeshifting process, making the details of its design moot. For this reason, the druid circles rely on outside suppliers to provide them with these weapons.

After discovering his totem during his initiation ritual, a novice druid is likely to come across a dying specimen of the spirit animal in what would be an amazing coincidence if you believe in coincidence. If the animal approves of the druid, the druid ritually sacrifices the animal and consecrates the skin, enabling the animal spirit to guard the druid when he wears its furs or feathers.

Many druids have several totem animals. The most commonly seen animals are the wolf, hawk, falcon and ram. In the past, many druids attuned themselves to the feral spirits of the bear and direwolf, but this had undesirable side effects at full moon and often led to an early descent into madness or death by silver crossbow bolt.

Druids are masters of shapeshifting, but one can enter into the animal mindset only so deep before it becomes hard to adapt to other animal minds. Alternatively, adapting a bow hunter attitude makes it hard to feel like a shapeshifted animal, making it harder to become a master shapeshifter.

You can only learn the level 1 skill of the werebear, trap rat, werewolf or bow trees if you have no points in any of the other four skill trees, and vice versa.